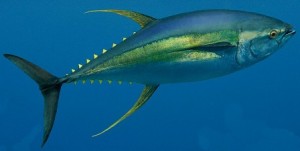 The Yellowfin Tuna is one of the largest tuna species in the world, reaching weights of over 300 pounds, but is significantly smaller than the Atlantic and Pacific bluefin tunas that can tip the scales at over 1,000 pounds, and is slightly smaller than the Bigeye Tuna and the Southern Bluefin Tuna.

Reported sizes have ranged as high as 94.1 in length and 441 lb in weight. The International Game Fish Association record for this species stands at 388 Lbs.

The Yellowfin Tuna is one of the most economically important fish in the world, with hundreds of thousands of tons taken by commercial fishermen worldwide every year. If you open a can of tuna, if it’s not albacore it’s probably Yellowfin Tuna.

This species has a wide range. Yellowfin Tuna is an abundant tropical tuna, found throughout the warmer reaches of the Atlantic, Pacific, and Indian oceans. They are found in a thick band around the equator throughout the world, inhabiting warm seas from the US-Canada border in the north to Australia in the south, and frequent depths from the surface down to 600 feet, although they can dive down to over 3,000 feet when necessary.

If you’re serious about catching Yellowfin Tuna, you’ll need to head out well offshore; they rarely venture any closer in than about 10 miles. Despite this, they can be relatively easy to find, because they cause a lot of surface disturbance.

Techniques and Tips for Yellowfin 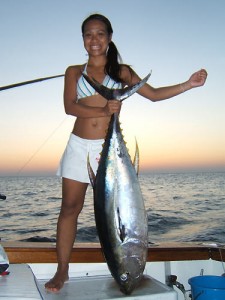 Yellowfin tuna are one of the most challenging species to catch with a rod and reel. Their large size, strength and speed can result in broken tackle if you are poorly prepared.

Boats typically need to run offshore at least 10 miles to find the right temperature edges for attracting Yellowfin Tuna. Trolling and chumming are the primary methods used by anglers. This involves creating a flashy presentation of multiple lures trolled in the boat wake while moving along at about 7-8 nautical miles per hour.

Single hook lures with plastic skirts are a common offering and chains or spreader bars of lures are an option to increase the visual attraction. Green is a popular color for Yellowfin Tuna. The idea is to have a pattern of lures that splash, wiggle and sparkle enough to trick the fish into thinking it is attacking a group of agitated baitfish.

Chumming involves introducing a baited hook to Yellowfin Tuna while the boat is drifting or anchored. Cut pieces of butterfish or silver hake are common baits, and small pieces of the bait are deliberately tossed in the water around the baited hook to attract tuna.

Yellowfin Tuna is considered by some of the best eating fish available. Yellowfin Tuna make great eating, but they also look great hanging on your wall.

Whatever you decide to do, get your Yellowfin Tuna on ice right away so it stays fresh for either your filleting knife or the taxidermist’s. If you decide to eat the fish, you should bleed it by making six-inch slits on either side and let the blood drain out before icing it.

Yellowfin Tuna is firm, dark-red meat with a strong flavor, and tastes mighty good whether it’s cooked or eaten raw. Although it’s not held in as high regard as bluefin tuna, the Japanese adore Yellowfin Tuna for sushi or sashimi and most of the best Yellowfin Tuna caught commercially are snapped up on the docks by Japanese buyers.

Hawaiians also favor Yellowfin Tuna, which they call ahi, and eat it both cooked and in a spicy, sushi-like dish called poke. Because it’s so versatile, it can be prepared as steak fillets, broiled, fried, baked, grilled… you name it.

There are hundreds of ways to prepare your catch. Asking a Yellowfin Tuna fishing guide or charter captain can be a great way to get that “secret recipe”.

Yellowfin Tuna are some of the most popular game fish in the world and given their tremendous fight, size, and tastiness, it’s easy to see why.

Next time you go out on the ocean, why not try fishing for Yellowfin Tuna. Once you hook into a big one, you may never go back to other game fish. And whether you bring that big Yellowfin Tuna home to eat or to hang on the wall, you’ll have a fish story to be proud of.

However, if you plan to release your catch, make sure to keep the fish in the water if possible while you carefully remove the hook. Avoid bruising or cutting the tuna during boatside handling.

If the tuna is fatigued, swim the fish along for a few minutes while the boat is in gear to allow the fish to “catch its breath”. It’ll live to fight another day and bring someone else the same high level of excitement.

Permit Fishing Down Under

Permit Fishing in Australia Permit are amongst the most desirable fish species any angler could hope to reel in – ...
Read More

As the spring season approaches, it’s time to grab a fly rod and get out on your favorite river or ...
Read More

Fishing buoy 10 on the Oregon Coast has become one of the favorite pastimes of the west coast angler and ...
Read More

Spinning reels are one of the most popular choices when it comes to bass fishing. There are many very good ...
Read More

Guest Post by Tim Carter —  This particular build I’m going to discuss is for a friend of mine out ...
Read More

Not Just Surviving but Thriving: Fishing During the Pandemic

Very few areas of life remain untouched by this pandemic. The COVID-19 pandemic has by and large confined people to ...
Read More
Load More Posts