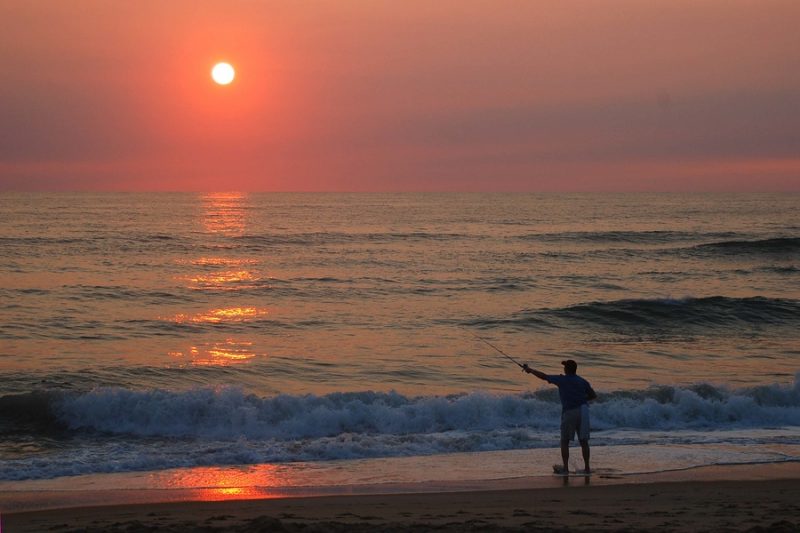 surf fishing on the outer banks

North Carolina is a state that from face value you would assume would be great for fishing, and you’d be right. A combination of mountains, beaches, and everything in between means you’re in for a good time if you’re taking a fishing expedition to North Carolina.

From mountain lakes like Lake Fontana that offer the best bass fishing you’ll find, to Oregon Inlet off of Hatteras Island, where you’ll find some of the richest offshore fishing opportunities, including the holy grail of big game fishing: the blue marlin. There are legendary places to fish everywhere you look in the Tar Heel State.

North Carolina is just south enough to have the advantage of great migratory billfish populations through the summer months. This includes the elusive white marlin. And Oregon Inlet, although named after a state across the nation, is one of North Carolina’s most prized fishing locations because of its abundance of white marlin.

In fact, Oregon Inlet has been featured in Marlin Magazine for it’s incredible white marlin population. The white marlin are usually found 40 miles to the northeast of Oregon Inlet at the convergence of the Gulf Stream and the Labrador Current, which is a cold current that flows from the Arctic Ocean.

The mixture of the cold Labrador current and the warm Gulf current make for interesting fishing conditions. In fact, the water is known to get choppy at times which causes the boats around the Outer Banks to be designed a little different, even dubbed “Carolina style boats.” These boats have sharp front ends with wide bows that allow them to slice through the chop and stay stable. Use ballyhoo to lure in the white marlin. They’ll be there off the Oregon Inlet from August through September.

Nearly everyone has heard about the legendary fishing off Hatteras Island that includes such exciting deep-sea species as kingfish, yellowfin and bluefin tuna, white and blue marlin and sailfish, but another Outer Banks destination that lives up to legendary fishing status is Ocracoke Island, AKA the favorite chill spot for Blackbeard and his cronies.

Ocracoke is a remote location in comparison to many of the other Outer Banks vacation destinations, Ocracoke is the nearest location in North Carolina to the gulf stream, meaning you can get to top-notch offshore fishing in a fraction of the time it takes elsewhere.

Continuing with the Blackbeard theme, there are a lot of shipwrecks around the Ocracoke area, where fish love to hang out, and fishing these wrecks can be a gold mine, just make sure you don’t add to the wreck count. The other offshore location mentioned earlier, Oregon Inlet, is just about 40 miles north of Ocracoke as well, meaning it’s possible for you to hit both of these great spots in one day.

Ocracoke can offer some great offshore fish species such as tuna, marlin, wahoo, dolphin, and more. And if you don’t have a boat with you, Ocracoke can be a surf fishing paradise as well, with the potential for massive red drum or grey trout. Some of the red drum landed from the beach can be as big as 60 pounds, an exciting haul for surf fishing. 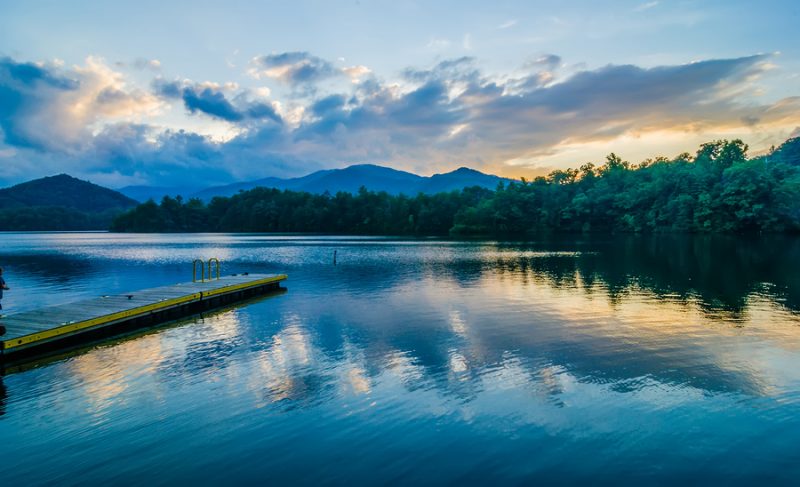 North Carolina is home to the Great Smoky Mountains National Park, a polar opposite environment to the offshore paradise described earlier. Lake Fontana is nestled just south of the National Park and is the fourth deepest manmade lake in the nation. Lake Fontana is unique for its cold water, despite being a southern lake.

This cold water makes for fish species that you might not usually find in waters as far south as the Carolinas. These fish include walleye, white bass, and steelhead. These three species specifically are known for their spring runs from March through May, where you can catch them from the bank or on the water.

Once these runs are over, the smallmouth and largemouth bass are the prime target for the lake into the summer and fall months along with huge catfish. This is one of the few places in the state that you’ll be able to catch walleye, a fish that has prospered in Lake Fontana since it was brought there in the 70s.

Another relaxing mountain fishing destination is Lake Chatuge, which is similar to Lake Fontana in that it has a large diversity of fish species, including walleye. Lake Chatuge sits on the North Carolina and Georgia line on the Hiwassee River.

Striped, smallmouth, largemouth, white, and spotted bass are all found in the lake’s deep waters. There are also trout found below the Chatuge Dam, leading into the Hiwassee River. There are 32 species of fish contained in the lake, so you never know what you’ll reel in.