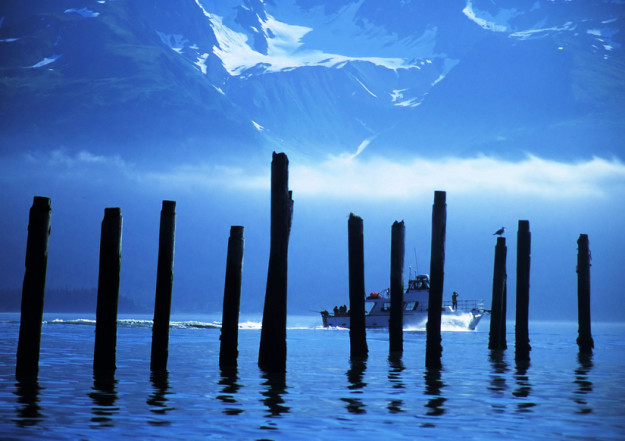 Alaska is a state that is separated from the United States by Canada, bordering the Canadian territory of the Yukon to the east as well as the province of British Columbia. It also borders the Pacific Ocean to the south as well as the west with a separation from Russia by the Bering Strait. It is the largest of the fifty states and has an economy largely based around fishing.

Fishing in Alaska, in fact, seems as natural as the land. When you factor in its many islands, the state has about 34,000 miles (54,720 km) worth of coastline. Although a little difficult to believe, Alaska is home to nearly 3 million lakes and 100,000 glaciers that feed them.

Additionally, it has 8 national parks – Eight! If that isn’t telling of a state with a focus on the great outdoors! These aren’t just your average nature trails, picnic by the lake park types either. Alaska does it big with its parks and gives nothing less than real, in your face, genuine wilderness. With glacier-fed rivers and streams and an ocean, the landscape around the state of Alaska is a haven for fishing enthusiasts.

When heading into the great Pacific, Alaskan fishing trips can produce some pretty serious fish. The Inside Passage, a little westward from Ketchikan, Alaska is a fantastic place to begin a saltwater excursion. Here you can experience Alaska fishing at its finest, catching all five of the salmon species and the infamous Halibut, which can get truly monstrous. In fact, the Halibut caught in these waters are known to weigh well over 100 pounds.

But, despite all of the available species within the Pacific, King Salmon tend to be the most prized. They weigh from 20-50 pounds on average and are renowned for their endurance and power. The largest ever caught here actually weighed a whopping 126 pounds!

When up against such epic marine life, you are going to need some stout gear to ensure you bring home your catch. Anglers fishing for the Alaskan Salmon and Halibut should consider proven brands of tackle for reliable control over the fish. There are many reels on the market specifically for Halibut and Salmon.

For Salmon, a 7′ rod – something that offers a good balance between weight and strength like a 12-25# line rated rod – should work well. A good 6’0″-6’6″, 40-80# fiberglass fishing rod will give you the necessary backbone to land monster Halibut. But not to worry, if you want to leave your fishing gear behind most Alaska fishing charters will have everything you need. 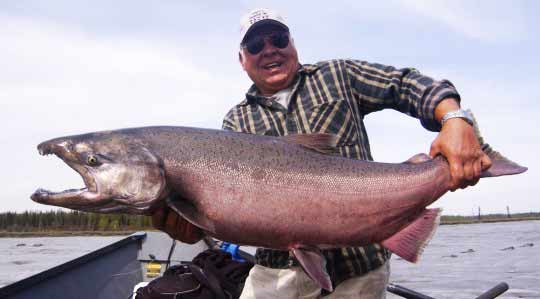 There are plenty of places along the Alaskan coast to get in on the action. Spend time around Anchor Point, Homer, Kachemak Bay State Park and Wilderness, Halibut Cove and Kenai Fjords National Park. Aside from the Salmon and Halibut, anglers can look forward to coming face to face with Sockeye Salmon, Rockfish and Lingcod too!

With around 3 million lakes to its name, Alaska is a hotspot for freshwater fishing. Eager anglers can expect to find Rainbow Trout, Arctic Char, Dolly Varden, Arctic Grayling, Sheefish (often referred to as “The Tarpon of the North”), Northern Pike and Pacific Salmon. A favorite trophy fish of the freshwaters is the Steelhead which ranges from 29-37 inches and can be found mostly during the month of May. The Varden are quite a delight for fishermen as they are plentiful and range from 10-21 inches in length. 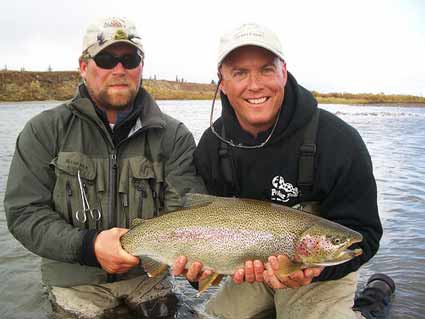 There are so many places in Alaska for freshwater fishing that the selection may seem a bit overwhelming. Hiring an Alaska fishing guide can help you narrow down your options but if you want to try it out on your own, here are some of the top destinations to bring your tackle box to.

Start off at the Chena River, particularly the upper region, for fantastic fishing for Grayling all year round, King Salmon towards to the end of July and Chum Salmon from the middle of August until the middle of October. Take a road trip along the 414 mile Dalton Highway and stop off along the way to catch Dolly Varden, Lake Trout, Northern Pike, Burbot and Arctic Grayling.

The best time for this trip would be from July through mid-September. The Delta Clearwater River is fed by a stream that holds a constant temperature, allowing the fishing to be ideal all year round. Here you will be able to find Whitefish, Grayling and a particular run of Silver Salmon in September.

For a more adventurous day out, try for the Coal Mine Road Lakes. This cluster of 8 small lakes offers little in the ways of facilities and camping is quite primitive. By taking a canoe or wading out into the water, your chances of catching Rainbow Trout, Arctic Char and Grayling will greatly increase.

The Kenai River on the Kenai Peninsula in southcentral  Alaska is one of the state’s most popular fishing locations and is its most frequently fished river. The river which runs some 82 miles from Kenai Lake westward to the Pacific Ocean is home to approximately 40 species of fish including Sockeye (Red Salmon), Silver (Coho) Salmon and many others. The upper Kenai is a popular spot with those looking to ply their fly rods in pursuit of Rainbow Trout pushing 20 lbs.

However, it is King Salmon (Chinook) that has made the Kenai River famous. The history of King Salmon fishing here is epic. This is where serious fishermen go for trophy Salmon. As a matter of fact, Kenai River King Salmon fishing is made up of three separate, spectacular runs from May through July, with each month producing bigger catches. By the last run in July, the Kings here are averaging 35 to 80 lbs. It is no wonder then that the world record of 97 lbs 4 oz for King Salmon was set here in 1985.