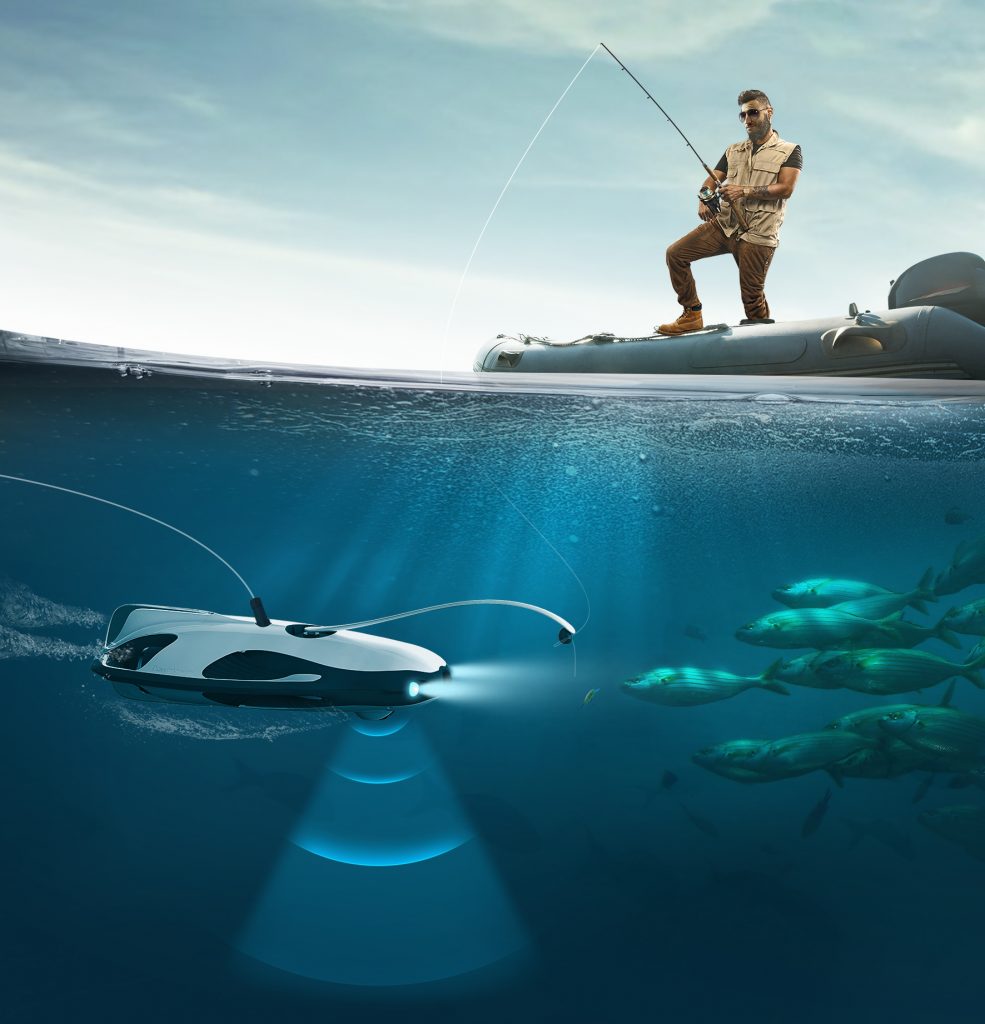 When thinking about drones, the first thing that could come to mind is a small device that looks like a helicopter flying around, being controlled by a person with a gigantic remote control.

This type of technology has been around for quite a while already, and it is now incredibly popular. Even children are asking for drones as Christmas and birthday presents

. They are also being used for multiple applications, such as professional video recording, security, field recognition and so on.

Fishing, like just about everything else in our world today, is not immune to the advances of high-tech. Drone technology has stepped forward and is now going underwater for the recreational fishing market. After years of research and prototypes, we now have the launch of a revolutionary design that could open a whole new vein of possibilities for drone manufacturers all over the world.

This revolution is being led by an underwater drone called the PowerRay and, while it has certainly stirred excitement in many sport fishing quarters, it has also raised plenty of questions in others. Let’s dig in.

Who’s Behind All the Fuss?

The creator of this new type of technology is not a stranger to the drone market. The PowerVision Group has been developing interesting and innovative designs for years now.

They specialize in building UAV devices (Unmanned Aerial Vehicle) and providing several other services, such as smart drones, virtual and augmented reality, among others. The company has offices in Australia, China, the United States, and Canada, Finland and Germany.

Their subsidiary Powervision Robot is tasked with developing UAV solutions, drones, and even robots that are multi-purpose and serve the consumer market. Their most popular device to date, the PowerEgg, was presented at CES 2016 to much fanfare. The aerial drone, which collapses into an egg-shaped sphere for easy storage, is billed by the company as “the most intuitive consumer drone” and is sold in North America, Europe, and China.

The PowerRay Fishfinder is an innovative underwater drone designed and developed by the PowerVision Group to be used for sportfishing in multiple aquatic environments including saltwater, freshwater and even ice fishing. 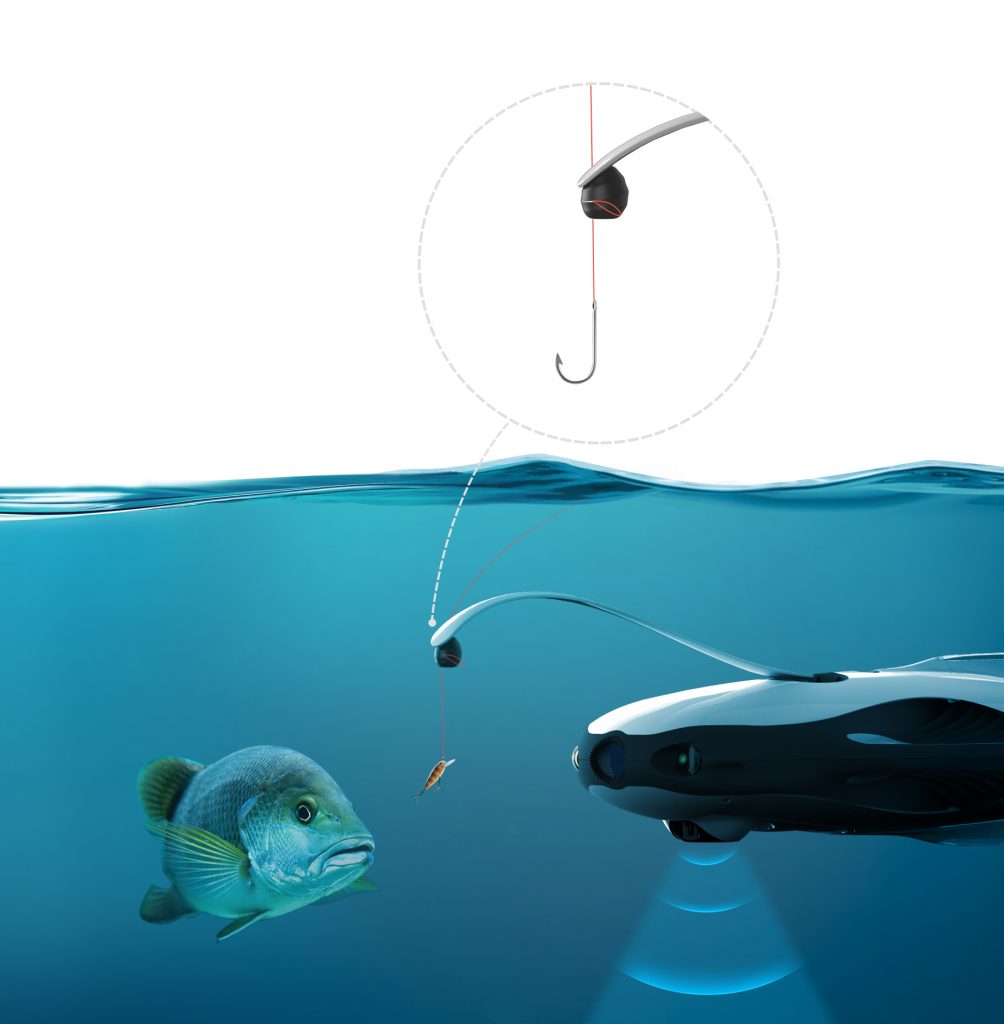 According to the manufacturer, the device can dive to a depth of a maximum of 30 meters (98 ft) underwater. It has an integrated sonar system with a depth of 40 meters (131 ft) which is used to detect fish in the area below the drone.

With onboard integrated Wi-Fi, it is also possible for the angler to visualize the information captured by the drone up to 80 meters or 262 ft. With the exact location of the fish concentration in hand, it is then possible to determine where to go with the boat and where to drop your hook and bait.

And the technological goodies keep coming: the PowerRay comes with an integrated 4K UHD camera for underwater use, delivering high-quality real-time images to any Android or iOS mobile device that has the PowerRay Mobile App installed.

According to the manufacturer, more detailed information is accessible via the app: fish distribution, real-time device speed, underwater position, temperature, and depth; even the underwater landscape is visible on the screen of the mobile device.

As if that were not enough to catch fish, the PowerRay also has an integrated LED luring system. By turning on a luring light with pre-adjusted LEDs, the fisherman can attract the fish to the position of the PowerRay drone, making the hunting even easier.

If the angler has no mobile device, it is possible to buy the PowerRay 3D display, which is a high-quality external display that can be directly connected to a cable to the drone. With this, the angler can also visualize the image content sent by the PowerRay Fishfinder.

Is There Anything Else This Drone Can Do?

Actually, yes. As if it was not enough with a light luring system, a 4K UHD camera and a mobile app that is able to supply you with a complete set of information about the fauna and flora of the water ecosystem that the angler is navigating, the drone’s use can escalate into a fully virtual reality experience.

Or should we say augmented reality experience, in this case? Using the PowerVision VR Google, it is possible to obtain a fully immersive experience with the images that the attached camera is capturing. It has a gesture-based navigation system, and multiple goggles can be connected simultaneously, allowing multiple users to have the same experience at the same time.

In case you’re wondering, the company has stated that the drone will be ready for pre-ordering starting February 2017. 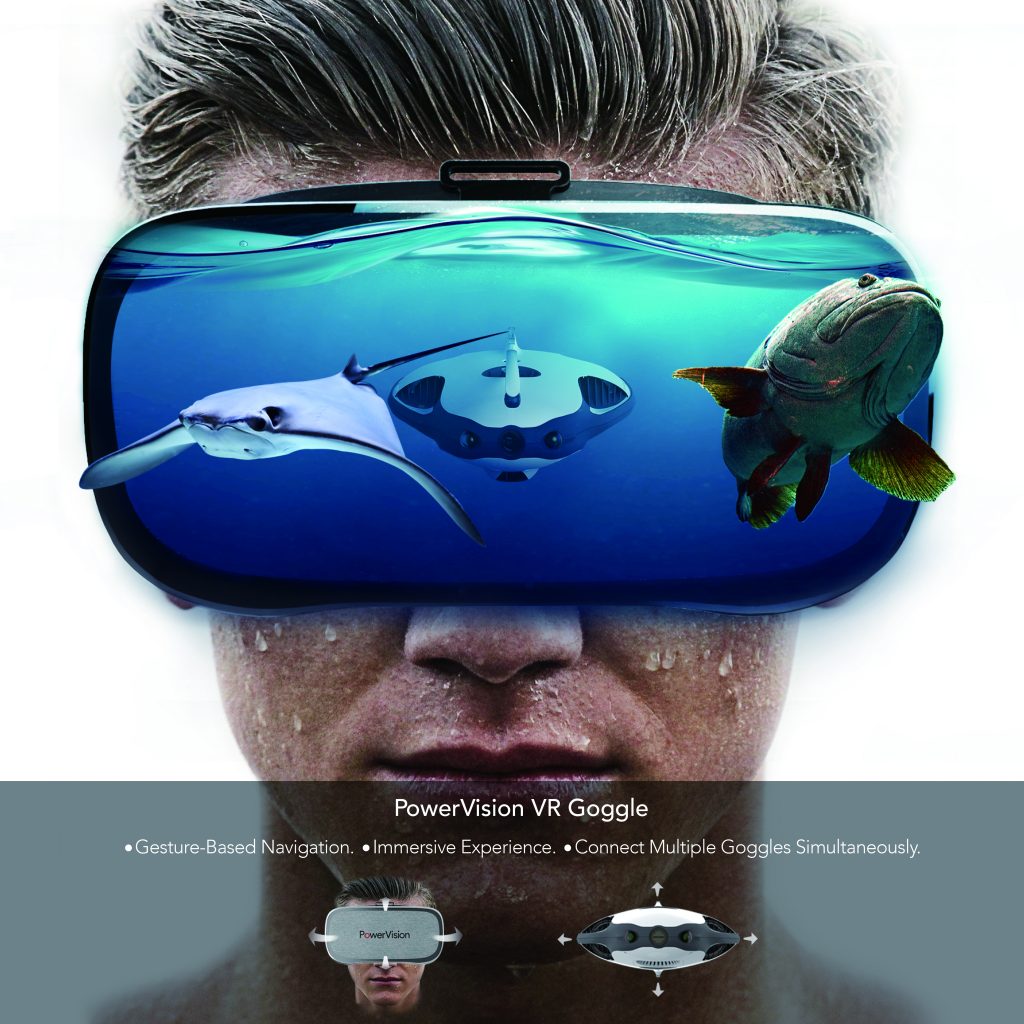 No doubt, the PowerRay is impressive in its technology and array of features. However, emotions about fishing with an underwater drone have been mixed so far. While the product does have several noted pros, there are also possible cons related to its use. The following is a shortlist of some of the commentary expressed online and elsewhere.

Some of the Pros:

Some of the Cons:

What Do You Think?

These are just some of the many questions, opinions, and concerns being shared by die-hard anglers and casual observers alike on sportfishing forums and other online communities regarding the use of the device.

We here at ReelAdventureFishing try to take a balanced view of any new gear or technology that impacts the sport we all love. It will be you, however, our readers and avid anglers, who will ultimately make the final analysis on whether the use of underwater drones in recreational fishing is a step forward or a step backward for the sport.

What do you think? We’d love to hear your opinions on the subject.

Malone MicroSport Kayak Trailer Reviewed Like most of us who spend any time kayaking or canoeing, you have probably already ...
Read More

Guest Post by Tobias Dimick -- Fly fishing can no doubt be a challenging sport to learn. However, by learning about ...
Read More

A look at 4 Affordable Baitcasting Reels Baitcasting reels play an important role in sportfishing despite the popularity and proliferation ...
Read More

On Deck or Around Town, Boat Shoes Are In High-quality boat shoes are available in many different styles, colors, and ...
Read More

For generations, kayaks have been the vessel of choice for fishermen, straight back to the Native peoples on the Bering ...
Read More

Shopping for the perfect bass fishing pole can seem similar to shopping for a vehicle. The massive amount of options ...
Read More

Ok, so you are ready to step up from your current go-to saltwater spinner reel to a reel that offers ...
Read More
Load More Reviews

4 thoughts on “Underwater Drones: Will Sport Fishing Ever Be the Same?”