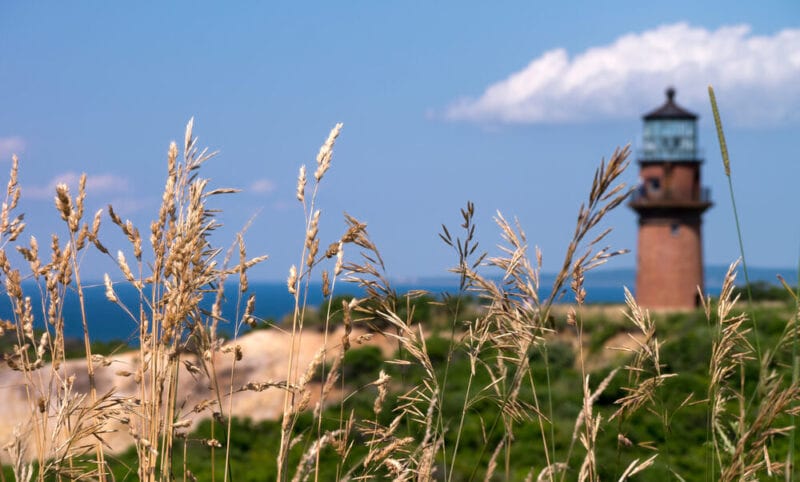 Striped bass are one of the most popular species of fish among fly fishermen because they can be pursued in a variety of arenas. Being from North Carolina, I thought the only way to catch striped bass in the ocean was with giant surf rods in the wintertime standing on the distant beaches of the Outer Banks.

Then a friend of mine invited me one summer to go to Martha’s Vineyard for a week to fish with his uncle who has a house there. I was relatively new to fly fishing and I had no idea what to expect. That trip began a lifelong love affair with striped bass.

For the next ten years, my friend and I traveled to Martha’s Vineyard to court this fair species. My friend’s uncle bought us our own Alumacraft boat so we could go fishing in “the pond” outside of Menemsha harbor while he was busy with work. There we learned how to find and present young stripers with flies while they learned about survival.

Then, Paul, my friend’s uncle, would take us out past the jetties in his 25-foot Regulator to do battle with the big boys. There we learned how to read diving birds, how to fish a pod of thousands of fish crashing against a school of sand eels, how to fish among ancient boat-wrecking boulders, and if the conditions were right, how to sight-cast to giant striper shadows cruising across a sand flat in search of crustaceans.

Some trips to Martha’s Vineyard were more successful than others. One year I think I caught a hundred fish and one year I only caught two. The lesson I learned from all of those trips is that fly fishing really isn’t about the catching, it is about the pursuit. Striped bass present themselves in a variety of ways, each of which requires dedication to the craft of fly fishing in order to realize success.

If you remember in the movie Jaws, Chief Brody implores his son to take his sailboat to the safety of “the pond.” His son is disappointed because “the pond is for babies.” In the movie, neither character is right because Jaws finds his way into the pond anyway. In real life, however, the characters are right: “the pond,” just outside of Menemsha harbor, is safer than beyond the jetties and it is a great place for the young to practice life.

Juvenile striped bass use the sheltered ecology of the pond to develop into adults. My friend and I used our 13-foot Alumacraft boat to learn how to fly fish for those “schoolies.” We would take turns at the bow trying not to hook each other as we flailed cast after cast at rocks and eddies that looked like promising fish holds.

We caught some too. A lot of them, in fact. None of these fish were keepers (28-inches) but they were great practice for future battles with their larger relatives. We were preparing each other for life on the outside, in deeper more dangerous waters.

Every fly fisherman should experience fishing in the hellish soup of fish and birds attacking a giant school of sand eels at least once in their life. It is a glorious dance of evolutionary camaraderie.

Striped bass do not have many natural predators so they do not need to spend much energy on hiding themselves like other species. They lay in waiting for light and current to bring the sand eels to the surface and then they pounce with fury. Diving birds are the signal to fishermen that the crazed ballet has begun.

Our captain knew how to position the boat so it would float aimlessly just outside the chaos so the presence of the boat wouldn’t put down the whole affair. Then we would present our flies as best we could. It usually would not take much to entice a strike, just a few strips, and then it was game on.

You can never be sure in situations like this what you are going to pull out of the water. Bluefish are as numerous as stripers. My friend even hooked one of the birds by accident, which we were able to throw a towel over and release unharmed.

Few things are as thrilling as being a part of one of these feeding frenzies. Each hook up presents different challenges and rewards that dance through your mind as you lay in bed that night trying to make sense of it all.

Stripers in the Moonlight 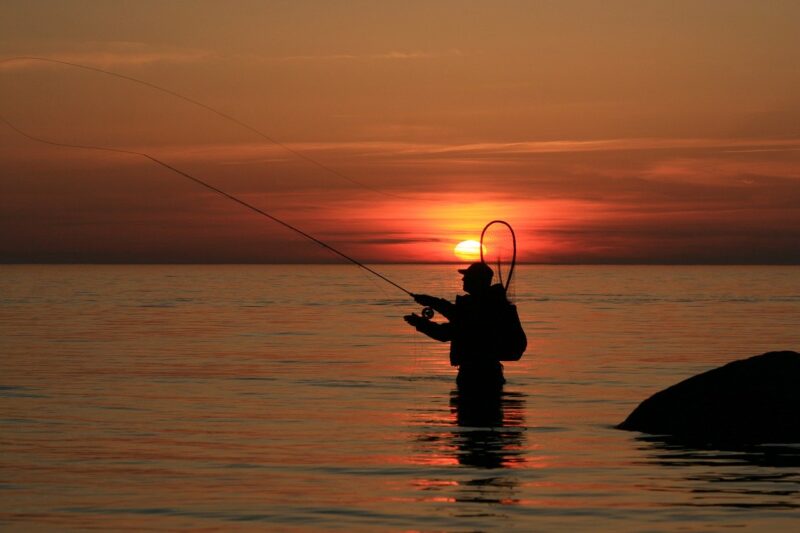 One of our trips to Martha’s Vineyard happened at the same time as the all-night fly fishing tournament famous among the anglers on the island. The money raised went towards a good cause and Paul suggested that we enter for fun.

The fishing had to be done from the beach, which offered its own set of challenges. Not only had I never fly fished at night, I had never fly fished in the surf. It is one thing to whip a hook through shifting wind during the day because you can at least see it as it hurtles toward you. But doing so at night has an eerie feel to it.

Holding a fly rod gives you a general sense of where the line is, but seeing the line is most important. At night, all you might see is a slight glisten of moonlight reflecting off the fly line’s slick coating. All you hear is the whoosh of the fly being dragged along in what you hope to be tight loops.

Then the surf pulls and pokes your line and sometimes grabs your fly and dumps it along with everything else ruining your chances at a fish. Somehow the stripers feed successfully in these conditions, but they only do it for about a month and a half, from the beginning of June to mid-July.

That night we landed one undersized fish between us. We did not bother to enter the catch into the tournament.

When I became obsessed with fly fishing about the age of 14, I would practice casting in the yard every day after school. My technique was not perfect but I developed my own style that served me well when it came time to perform under pressure. You cannot prepare yourself for the adrenaline rush of seeing a tailing redfish or a cruising striped bass right in front of you. That is why preparation is so important.

One year in Martha’s Vineyard, for whatever reason, the stripers were not presenting themselves in the familiar giant schools. We searched rocks and jetties for four days to no avail. Luckily Paul had thirty years of experience fishing on the island and he figured out that on our last day, because of the right conditions, we might get a shot at sight casting for fish off of Dogfish Bar.

At low tide, we anchored at the west end of a beautiful white sandbar and hoped for lightning to strike. The clear water had the slightest hint of blue like we were somewhere in the Keys and not in New England. We saw fish cruising everywhere, but because of the current and impossibility of push-polling our large boat, we could not go chasing them. We had to sit and wait for them to come to us.

I do not remember how long we waited. Each of us had a few long shots at fish that seemed to know exactly how far away to stay. We were about to quit because the tide was coming in and the flat would disappear once more, capping a disappointing trip with one more failure.

Then, I saw the gray torpedo coming right for the bow. With no time to think, I flipped my crab fly about ten feet in front of me right on the fish’s nose. This was my only chance because at any second this fish was going to see the shadow of the boat and spook.

We were so close to each other that I saw the white of the inside of the bass’s mouth as he inhaled my crab fly. I set the hook into the mouth of the greatest fish I ever caught in my life. Twenty minutes later we had the 20-pound, 35-inch striped bass in the boat.

In the end, all that fly fishing affords us is great memories. I look forward to making more of them.

You’ll love these other posts too:

Guest post by Phil James The Caribbean sea has long held an allure as a place of mystery and adventure ...
Read More

By Damion Fryer Light Rock Fishing in Tenerife for Mini Species It’s 6:50 am, there’s not a cloud in the ...
Read More

Guest Post by Dena Standley — I can’t talk about surf fishing for sharks without telling the story of my ...
Read More

Top Ten Steelhead Fishing Destinations in the US

I vividly remember my childhood drives to school along the South Fork of the Clearwater River in central Idaho as ...
Read More

Guest Post by Tobias Dimick -- Fly fishing can no doubt be a challenging sport to learn. However, by learning about ...
Read More

Sailfish are two species of fish living in warmer sections of all the oceans of the world. They are blue ...
Read More
Load More Posts