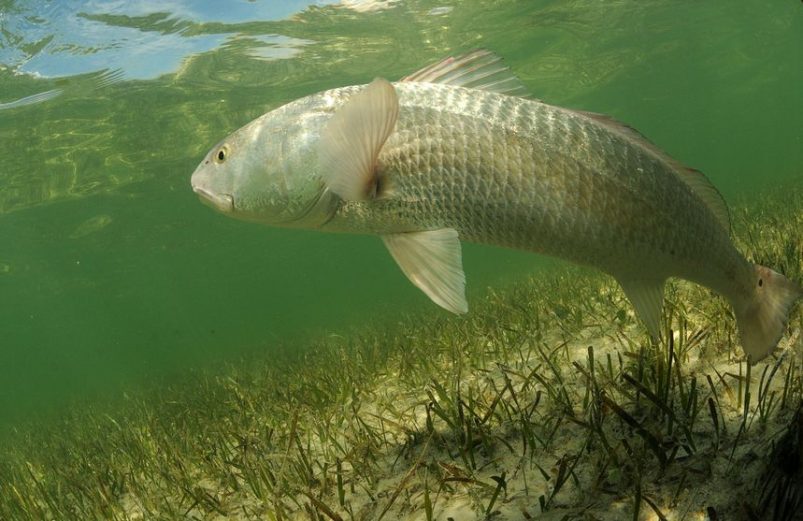 Also known to anglers as Red Drum and Channel Bass, they have a reddish overall coloration and one or more dark spots at the base of the tail.

These popular sport fish can often be found feeding at the bottom on crustaceans and mollusks – a diet that definitely contributes to the Redfish’s excellent taste. They also take small fish, especially mullet. Their usual adult weight is under 40 pounds but can reach into the 90-pound range. These large specimens are referred to as Bull Redfish or “Bull Reds“.

Where and When to Catch Redfish

The Redfish is a much sought-after game fish that is found in the Atlantic Ocean from Massachusetts to Florida, and in the Gulf of Mexico from Florida to Northern Mexico. With such a wide range, where to fish for Redfish really depends on what areas are offering the best action in each season.

If you’re willing to travel along the Atlantic coast and to the Gulf of Mexico, you can experience great angling opportunities throughout the entire year. It isn’t hard to find huge schools making their way out into the deeper waters.

Although they are found almost everywhere along the Atlantic coast, some spots are more noted for their abundance and record catches.

The Hatteras Island which forms part of the Outer Banks in North Carolina is one such spot known for its big Reds in the spring. They can be caught here from just about anywhere during the season, even right from the surf or piers.

But the fall is the time for some really spectacular fishing here as the mullet run brings in trophy Reds.

The Redfish action is also excellent from South Carolina down into Georgia during this time of year. As the baitfish continue their travel inshore in October and November, you’ll find hot action with bulls in the 25-40 lbs range feeding in preparation for winter in locations such as the Santee River and Hilton Head, and the St. Marys River to the Savannah River.

Further south into Florida and around into the Gulf states, the fishing only gets better as the Redfish season is extended year-round.

Florida is dotted with Redfish hotspots all along the Atlantic coast and the Indian River and St. Lucie River from Jacksonville to the 72 miles stretch that makes up the Space Coast (Titusville, Cocoa, Melbourne and Palm Bay) to the Treasure Coast (Sebastian Inlet, Vero Beach and Stuart) and further down to South Florida and the Upper Keys.

In the Gulf of Mexico, those looking for trophy redfish will readily find them along Florida’s Gulf coast in popular locations such as the Sanibel and Captiva Islands in the lower Gulf to Tampa Bay/Clearwater and up to Apalachicola and Destin in the Panhandle.

Onto the Gulf states, Redfish fishing in Texas from South Padre Island, Laguna Madre, Rockport, and Galveston has proven to be extremely productive for Redfish anglers over the years.

Louisiana Redfish fishing inshore in Buras and Venice regularly produces catches topping 40 inches or more, particularly in the months of September and October.

From Gulfport to Biloxi in Mississippi, anglers are rewarded with world-class Redfish fishing as these areas consistently produce in number and size of catches.

Alabama rounds out the outstanding Redfish opportunities in the Gulf with areas of Mobile, Gulf Shores, and Orange Beach. Here the Reds are so abundant they have been known to “stack up”, with multiple hookups during feeding frenzies a common occurrence.

How to Catch Redfish – Baits and Techniques 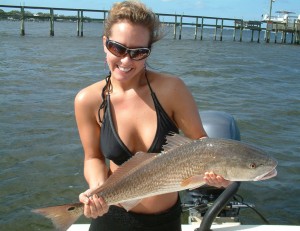 Because they are wary and will spook very easily, being stealth plays a big part in how to fish for redfish. This is especially true in shallow or very clear water. Approach quietly with a push pole taking extra care not to make any unnecessary noises.

Incoming tides bring with its food, baitfish, etc. that the Redfish will feed on. Also, small crabs and shrimp become more active on the incoming tide enticing them to feed at those locations.

The opposite is true for outgoing tides – as the water withdraws, they will wait and feed on whatever bait is carried back out with the tide. Channels and deeper areas are good places to find these cautious fish on an outgoing tide. Work these locations for some terrific action.

Shrimp, pinfish, small crabs, finger mullet, and cut fish are some of the best Red Drum bait. They can be fished under a float or free-lined into currents past structures or grass flats where the bait are. Many anglers, however, believe that the best way to catch redfish is by using lures, and there are several artificial lures that work well in catching them.

They include gold spoons, several varieties of popular soft swimming lures, and jigs. Fish these around structures during rising and falling tides. Tackle selection should include spinning or baitcasting gear using a quality fishing line of 10 to 20 lb rating and a 1/0 to 4/0 hook.

Because much of the Redfish’s diet consists of eating small crabs and shrimp, you would be right to assume that the taste has a sweet-moderate flavor and not oily at all. The flesh is firm with a slight reddish tint that turns to pure white when cooked.

Fish over 15 lbs, however, can become tough and have a consistency comparable with chicken, rather than the flaky texture of many species of fish. Younger fish are often indistinguishable in flavor from Black Drum.

Redfish lends itself particularly well to being baked or broiled but are also delicious coming off the grill or smoker – they are also great in seafood chowders and soups. If you are not sure how to prepare it, ask your fishing guide or charter captain how to cook this most excellent fish and they will usually be more than happy to share one their favorite Redfish recipes with you.

The Redfish is a challenging opponent on the grass beds and flats of Florida and the Gulf of Mexico. The shallower the water, the more thrilling the fight. The bulk of small marine life and food will be found in shallow water around structures and near grassy cover.

This offers the small fish, crustaceans and mollusks protection from predators. Therefore, your target will usually be found near this abundant food supply.

Welcome to our Bass Fishing Buyer's Guide! This is a comprehensive rundown of the most critical equipment you need to ...
Read More

Shimano Shimano is one of the world's leading manufacturers of fishing tackle today, but it did not start out making ...
Read More

Protecting Our Fish and the Future of Sport Fishing We hear a lot of talk about sustainable fishing practices and ...
Read More

Fishing for Stripers, Never a Boring Adventure They are called rockfish, linesiders, and stripers, but the one thing these rugged ...
Read More

A highly prized gamefish, the Northern Pike is fantastic to catch because of its sheer size, strength, and fighting ability ...
Read More

When summertime comes around, every fly fisherman from Florida to North Carolina starts dreaming about one thing: flood tides. A ...
Read More

Fishing Lake Mille Lacs for Massive Muskie The muskellunge, better know as Muskie, or musky, for short is a very ...
Read More

Line and Lure Colors: How They Impact Your Fishing Success

When visiting most tackle stores - whether online or offline - you’re likely to come across a huge selection of ...
Read More
Load More Posts