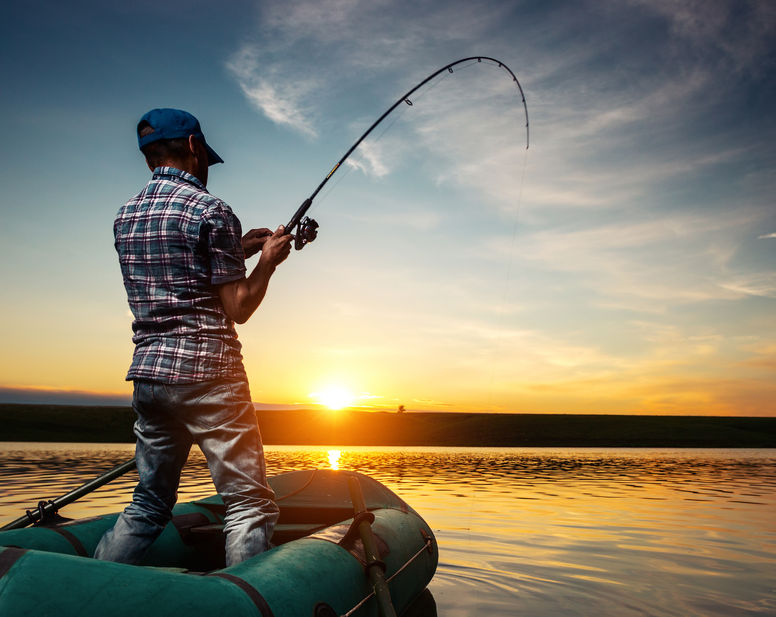 The Economics of Recreational Fishing in America

Americans love the great outdoors, and this enthusiasm for hunting and fishing as well as other outdoor recreation has an economic value. Though this post also references other outdoor activities, the focus is on the recreational fishing industry.

Recreational fishing, or sportfishing, is a major contributor to the U.S. economy. But just exactly how big is the recreational fishing industry? I don’t think most of us give the subject much thought, but it is huge.

Well, according to an updated report titled Economic Contributions of Recreational Fishing: U.S. Congressional Districts put out in February 2017 by the American Sportfishing Association in conjunction with Southwick Associates, a market research firm that specializes in outdoor recreation, the financial impact that recreational fishing has on our country’s bottom line significant, with ripples that are felt far and wide across the U.S. economy.

The study shows that recreational fishing adds more than $115 billion annually and some 800,000-plus jobs to the U.S. economy. Let’s put that number in perspective for a minute. That figure is roughly the same as the 2017 combined projected GDP (Gross National Product) for Costa Rica, Mozambique, Cambodia and Iceland (source: International Monetary Fund World Economic Outlook, Oct. 2016). Big digits!

The report points to the sustained growth of sportfishing as a major contributor to the economic prosperity of the nation. The 46 million-plus U.S. anglers (the number of anglers has grown by 11% since 2006), who spent more than $48 billion in retail purchases (trip-related, fishing tackle and equipment expenditures), were major catalysts for the broader U.S. economy.

The ripple effects of this spending by recreational anglers have had a positive influence across the general economy. But Let’s just look at the recreational fishing industry, for a second, for an example of the benefits of all that consumer spending.

Retailers spent more on inventory, wholesalers, distributors, and manufacturers bought more goods and materials, and the employees who work in the various recreational fishing-related jobs – think the guy or gal who sold you that new bass lure or the bucket of mullet at your local bait and tackle shop – spent their hard-earned wages on the same goods and services that we all buy.

The study, which builds upon the U.S. Fish & Wildlife Service’s 2011 National Survey of Fishing, Hunting, and Wildlife-Associated Recreation report and the 2013 American Sportfishing Association  Sportfishing in America: An Economic Force for Conservation study, analyzes recreational fishing economic impact across all 50 U.S. states.

The state by state statistics highlight the benefits that recreational fishing has on the local, state and national economy. The following list ranks the top 10 states (in order) in terms of retail spending/sales as well as the contributions to job creation, salaries and wages, and total economic output, or ripple effect, throughout the broader economy as a result of the original retail sale. 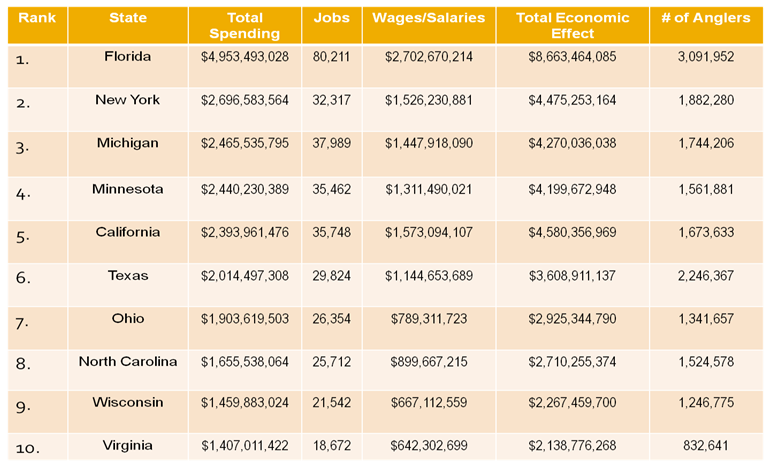 We also can add to this the $15 billion dollars in local, state and federal tax revenues generated by recreational fishing. While these numbers may not surprise some industry professionals, they are eye-opening, to say the least.

So, who spends more on fishing, recreational freshwater or saltwater anglers? Well, that’s not really a fair question since there are over 27.5 million freshwater fishermen to 8.9 million for saltwater. (source: 2011 & 2016 National Survey of Fishing, Hunting, and Wildlife-Associated Recreation report).

The breakdown in dollars spent on fishing trips and equipment expenditures, however, was $25.7 billion for freshwater and $10.3 billion saltwater. The average fishing-related spending for all anglers, both freshwater, and saltwater was $1262. 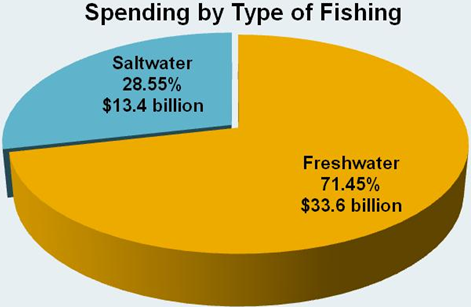 A quick look at the chart above will tell you that although saltwater fishing in the U.S. is certainly popular, almost three-quarters of the angling revenues come from freshwater fishing.

That is not surprising at all as the vast majority of Americans do not live in proximity to ocean water. You fish what is available and, for most of us, that is inland ponds, lakes, rivers, and streams.

In case you were wondering, what species garnered the most attention from recreational fishermen in terms of time and money?

If you guessed bass on the freshwater side, namely largemouth bass, you are right. Panfish came in second with trout third. Saltwater anglers favored redfish (red drum) followed by striped bass and flatfish (flounder, halibut, and soles).

Many related industries are positively affected by the growth of recreational fishing and the increased spending that comes with it. Below are just some with which we are familiar:

For most of us, sport fishing is just about spending a good time with family, friends or fellow anglers. It also provides a chance to bond with nature and to kick back and relax for many of us. But we also must understand how recreational fishing connects and contributes to the greater economy to get a more complete picture of the sport’s value.

Recreational fishing is a multi-billion dollar industry that involves over a quarter-million jobs, permanent and seasonal, and generates billions of dollars in wages and salaries,  as well as local, state and federal tax revenues. Yes, it is a sport first and foremost to most of us – but it is also big business in our great U.S. of A and a significant driver of our local, state and national economies.

Permit Fishing Down Under

Permit Fishing in Australia Permit are amongst the most desirable fish species any angler could hope to reel in – ...
Read More

Success is found in the details. People who become great pay attention to the minor aspects of a situation and ...
Read More

Surf Fishing Tips for More Catches at the Beach

Surf Fishing Basics and Tips for Beginners and Anyone Who Wants to Catch More Fish from the Surf Surf fishing ...
Read More

The Clackamas River is a tributary, about 83 miles long, of the Willamette River in northwestern Oregon in the United ...
Read More

A highly prized gamefish, the Northern Pike is fantastic to catch because of its sheer size, strength, and fighting ability ...
Read More

A Great Time to Get Your Fishing Gear in Order Winter is here. Boy, winter is here with a statement ...
Read More

How to Catch More Largemouth Bass in Any Season

Luring The Largemouth Bass Anytime The largemouth bass is probably the most popular and sought-after freshwater fish in the North ...
Read More

Article by Willie Luker Fishing for catfish in a freshwater environment provides its own unique challenges, despite what pictures of ...
Read More
Load More Posts

2 thoughts on “Recreational Fishing: Reeling in Big Dollars for the U.S. Economy”

The Rainbow Trout: America’s Western Fish The Oncorhynchus mykiss, or simply known as the Rainbow Trout, is one of America’s …
Read More
No Comments on Lake Trolling Strategies and Tips to Help You Land More Fish