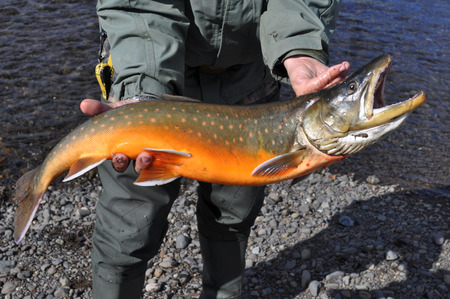 Both belong to the char clan but even the most perceptive angler may not be able to tell them apart. For a long time, it was the belief that both these fish belong to the same Arctic Char (or Arctic Charr) species.

While even scientists have been at odds for years as to whether the Arctic Char and Dolly Varden are of the same species; science has determined that they are indeed different species. But this has not stopped the arguments regarding their differences and similarities and whether or not they belong to different species.

The Dolly Varden and Arctic Char both inhabit Canada and the United States with some overlapping in range and habitat. Dolly Varden can be found along the Southeastern Alaskan coast, in the Gulf of Alaska, all along Alaska’s West coast and into the Canadian Arctic via the McKenzie River.

On the other hand, no other freshwater fish is found farther north than the Arctic Char. Its distribution ranges from Alaska and Canada to many countries with a coast on the Arctic Ocean, including Russia and Greenland, and into Sweden and Norway, and even as far as northern U.K.

They have a lot in common and are beautiful fish to look at, but don’t be deceived as they have a reputation for being among the hardest fighting game fish. Having said that, hopefully, this post serves as a kind of guide for spotting the differences between the two closely-related coldwater species.

But let’s first, briefly, look at why they are so often mistaken for each other. To begin with, they are both identified by their prominent bright flanks with pink/hot red spots. On top, they share similar-looking green/ blue coloration and cream-colored spots. Both the arctic char and Dolly Varden are anadromous in that they spawn in freshwater and go out to sea as adults.

Both species spawn in freshwater from September to October with emerging fry in mid-July. In freshwater, they feed on shrimp and insect larvae.  At sea, snails and clams are preferred.

How to Tell Them Apart

As difficult as it is to tell the Char and Varden species apart, you can certainly try but it will take some work and you may still have uncertain results. In larger fish, Dolly Varden can weigh 10 pounds or more (they have been caught as high as 20 lbs) while the naturally larger Arctic Char can get up to 30+ pounds in some circumstances (such as sea-run Char).

Counting the gill rakers can also be useful in distinguishing between the two species. Dolly Varden has twenty-two gill rakers while the Char has between twenty-five and thirty.

The tail on Arctic Char is more deeply forked than the tail of Dolly Varden.  A closer look at the caudal peduncle, which is that area next to the tail fin, shows it is narrower in the Arctic Char. You may also be able to observe some differences in pre-sea run fish by looking at their flank spots. The Dolly Varden, while having a greater number, has smaller spots than the Arctic Char.

Some differences can also be seen between the spawning Dolly and Char. The Arctic Char usually has a yellow, rose, gold or orange color while the Dolly Varden can often be identified by a pink or red hue with red spots on the lower belly.

When it comes to the spawning male Arctic Char and the spawning male Dolly Varden, another difference can be observed in the “kype” or hook on the lower jaw. The kype is larger in the Dolly Varden and smaller In the Arctic Char. There are also several internal differences that have been identified but finding them will require you to kill the fish. 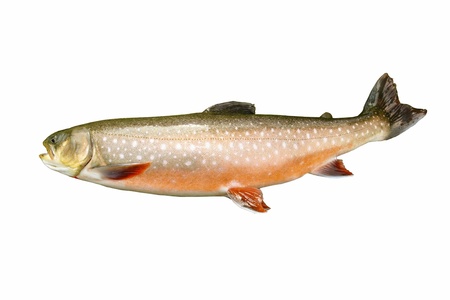 Fishing for Arctic Char and Dolly Varden is a thrill ride every angler should experience. These amazing species are highly sought after for their fierce fighting ability and their beautiful spawning colors. Their Spectacular jumps and impressive runs will amaze, delight and challenge the most experienced angler. These “twins” are without a doubt among the top sport fishing adventures and figuring out one species from the other only enhances the experience.

Fishing for Arctic Char and Dolly Varden can be done similarly with baitcasting or spinning tackle that includes a medium-heavy rod in the 7′ to 8′ range, a quality reel and 10-20 lb test monofilament or braided line attached to a fluorocarbon leader.

Fly fishing gear is also an excellent choice for these fish. An 8 –10 weight fly rod paired with a sealed-bearing fly reel and a  good sink-tip fly line used with a pattern that mimics the available food source in the lake or river is an ideal setup for Dolly Varden and Arctic Char alike. Streamer flies, Clouser Minnows, and egg pattern flies are effective patterns.