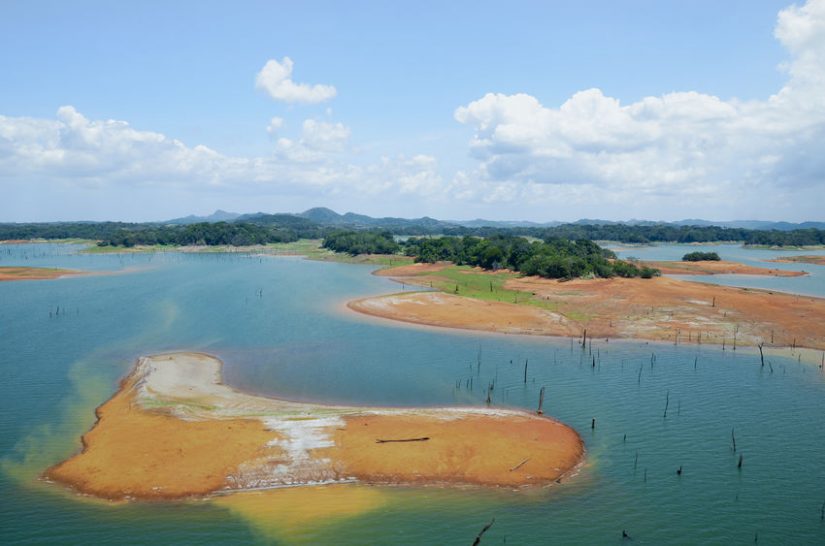 It’s no secret that American President Theodore Roosevelt was an avid outdoorsman and proponent of “masculine vigor,” so one almost wonders if he knew that completion of the Panama Canal would create a number of fantastic fishing spots in Central America.

Of course, we’ll never know if Teddy was thinking about fishing while sitting on that steam shovel in 1906, but we certainly know that the construction efforts resulted in what was at the time the largest man-made lake in the world and is today one of the best spots in the world for Peacock Bass fishing.

Gatun Lake, known to the locals simply as Lago Gatún, is an area of over 164 square miles and is dotted with small islands, the tops of hills that were flooded when construction of the Gatun Dam created the lake.

The area around Lake Gatun is surrounded by thick rainforest, natural protection for its various species of wildlife and one of the few places on earth where species native to Central America can be seen in their natural, undisturbed state.

The lake, which is roughly 164 sq miles in size (425 km), now serves as a major component of the Panama Canal crossing and is host to large amounts of shipping traffic. Even so, the primary recreational activity in the Gatun Lake area is fishing, with anglers from around the world flocking to the site for a chance to hook a few of the lake’s abundant Peacock Bass (called “Sargento” locally). 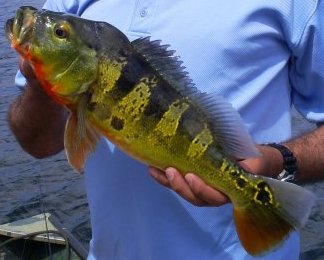 While the Peacock Bass is the dominant game fish in the lake, it’s not native to the Panama waters.

The fish actually originates from South American waters including the Amazon River – where Peacock Bass fishing is wildly popular- but was introduced to the lake around 1967 by a local businessman (accidentally, some say) and in less than 10 years became the lake’s dominant species.

As it is this turned out very well for everyone, as the Peacock Bass has become synonymous with the lake area, are incredibly fun to catch and make for great eating. They are a very visual species and like bright lures and, if you can spot some live minnows or other natural baits, it won’t be long before you are reeling in a big one.

Gatun Lake can be easily accessed from Panama City, and since you’ll probably be flying into the city’s Tocumen International Airport, this makes traveling to the spot fairly simple. Car rentals are inexpensive in Panama City and there are plenty of hotels to choose from.

Once you’ve reached the lake, you’ll be able to buy live bait and rent fishing poles and live vests right on the landing; locals will even filet your catch for about 20 cents per fish.

Of course, if you want to just enjoy and let someone else worry about the details, then booking one of the many local fishing guides or Gatun Lake fishing charters are the smart way to go. These guys are local, most speak enough English in case your Espanol isn’t up to snuff and, more importantly, they know precisely where to take you to catch these fun and aggressive fish.

And since, this is their livelihood, they are going to see to it that you come back with fish, after all their reputation and business depend on it. Rates can range from $80 to $400/day depending on the boat and size of the fishing party.

Remember to bring sunblock and a hat, because the sun will be unforgiving so close to the equator. You’ll also want to bring food and drink provisions to the lake as there is nowhere to buy snacks near the landing. We probably don’t have to tell you that bass lures will be your prime choice if you’re bringing your own gear.

Check Out These Other Posts:

5 Casts Every Fly Fisherman Should Master

5 Essential Fly Fishing Casting Techniques To anglers who fly fish, the cast is quite important to their success on the ...
Read More

Fish Farming: Do the Pros Outweigh the Cons?

Fish Farming - Good, Bad or Both? Fish farming, which is part of our aquaculture, is the commercial breeding of ...
Read More

Shimano Shimano is one of the world's leading manufacturers of fishing tackle today, but it did not start out making ...
Read More

Although I have been catfishing many times, for this story, I called in an expert, my dad. He grew up ...
Read More

The Clackamas River is a tributary, about 83 miles long, of the Willamette River in northwestern Oregon in the United ...
Read More

Catch More Summer Bass with These 5 Tried and True Concepts

The sun is shining, the trees are green, and summer bass fishing is in full swing. You can be a ...
Read More

Fishing One of These 5 Great Parks Should Be on Your Bucket List Forget going down to the usual local ...
Read More

The 5 Biggest Threats to Recreational Fishing

What Are the Threats to Recreational Fishing? Recreational fishing is under threat. Fish populations are dwindling, and they show little sign of ...
Read More
Load More Posts

The Rainbow Trout: America’s Western Fish The Oncorhynchus mykiss, or simply known as the Rainbow Trout, is one of America’s …
Read More
No Comments on Lake Trolling Strategies and Tips to Help You Land More Fish