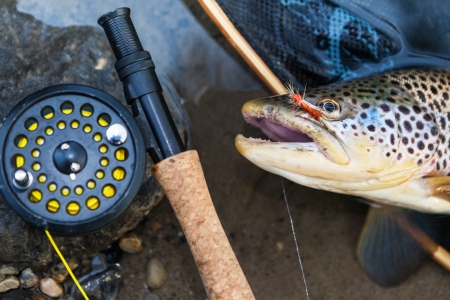 To anglers who fly fish, the cast is quite important to their success on the water. How you put the fly in the water plays a key role in whether or not you are going to catch fish.

The fly fishing casting technique that is used is also partly dependent upon the fishing conditions, so it is worthwhile to master more than one style. There are several types of casts, each with a few variations, but let’s take a look at the 5 essential casts every fly fisherman should have in his or her arsenal.

Fly casting basics start with the cast that should be mastered from the beginning. This is the standard cast, sometimes also called the “figure eight cast”. To an observer who is watching the fisherman, the fly appears to move in a sideways figure eight pattern.

To use a standard cast, release several feet of line from the fly reel, then bring the tip of the pole straight up and back. The fly should flip up and back while the fly line is simultaneously stripped out to follow the fly. The rod is then brought forward so the fly moves in an arc and back out over the water to complete the sideways figure eight. Absent any jerky movements, the action should appear graceful with the fly touching down gently on the surface of the water.

If you want to cast your fly farther out from shore, simply repeat the motions, stripping out some more line each time. Between the casts, draw the fly in, using your fingers to pull in only a small amount of line each time, so the fly appears to jerk a little on the surface of the water. This mimics the movement of a real insect on the surface of the water, which encourages the fish to strike.

The open cast is sometimes called the false or fake cast. It is basically a standard cast that is repeated several times before actually letting the fly land on the water. The purpose is primarily to get the water off the fly and the line, to allow the fly to float better. For this reason, it is used mostly for dry fly fishing, when keeping the fly dry is preferable.

The open cast also allows the fly fisherman to put his fly where he wants it, with a great deal more accuracy. As the fly isn’t cast into the water until the end of several figure eights, the cast is ‘open’. The last of the series ‘closes’ the cast by allowing the fly to land on the surface. Some fishermen use the open cast in order to bring more fly line into play, so they can place the fly farther away at the outset.

The side cast is useful for when you are in a spot where something is behind you or on either side, where it isn’t possible to bring the line up above and behind you without getting snagged.

The motion of the cast still looks like a sideways figure eight, but it is much tighter. The fly may look like it comes back and then moves forward almost directly, but just to one side or the other.

It is done as with a standard cast, except that the tip of the pole is brought to the side rather than overhead. Thus, what the observer would see is very close to what is actually happening with the fly. Done properly, though, the fly should still loop at the end of the back cast and should never snap or come to a complete stop before moving forward.

A roll cast is used when there is even less clearance or when the fisherman wants to place the fly repeatedly into the same place.

To do this, the tip of the pole is brought back and around, into a loop, which translates to the line and ultimately to the fly. The line appears to roll in a loop with most of the loop in the water. The fly is ‘aimed’ by the final direction of the tip of the pole, so it is possible to cast the fly upstream, to begin with, and to use a roll cast to place it back upstream after the current has carried it farther downstream, though the direction isn’t quite the same.

This is a good cast to use if you are standing with thick vegetation behind you, over you and on either side of you, because the fly remains in or over the water. It is a little harder to master than a standard cast, but roll casting can be used in place of or in conjunction with standard casting. 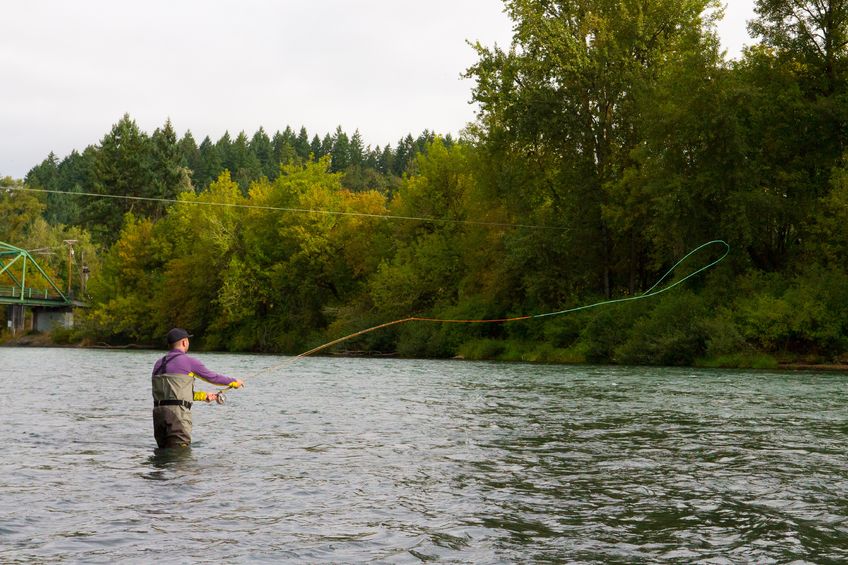 Though it isn’t used as much with most freshwater fly fishing, casting a fly rod using the double handed method is useful for when the fisherman wants to cast with more power. The cast is exactly as it sounds; one in which both hands grip the pole while the fly is being cast into the water, such as when fly fishing in the ocean and when using heavier line.

Experienced fly fishermen will have mastered all of these casts, though, on a normal fishing trip, they may only use one or two of them. Each is useful under certain circumstances and it is worthwhile to learn them all, beginning with the standard cast. The best way to become an expert in any of these casts is to practice them over and over, in a variety of conditions. Doing so not only builds proficiency, but it also gives you a better understanding of which cast is best to use in a given set of circumstances.

The end result of the proficiency is that you can catch more fish, which is the object of fly fishing, to begin with. Being able to use the casts properly is also the difference between the graceful movements of a seasoned fly fisherman and the beginner who tends to use the fly rod like a club. Fish on, friends!